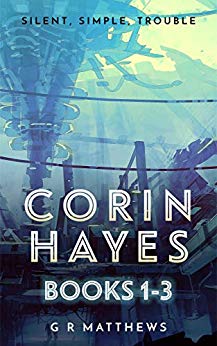 A Special Package full of the thrills of Corin Hayes and a Surprise Cover Reveal for Back in Blue, Corin Hayes Book 4.

The Corin Hayes Omnibus has arrived. With a new cover and clever title, books 1-3 are

now available in one volume. Book 4 is on its way with a special cover reveal below. Readers familiar with the series are excited to get more of our uniquely talented fish-suit expert vand his ever increasingly dangerous involvement with the corporate owned cities. 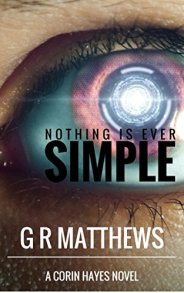 A terrific mash up of SciFi and Techno-thriller, Corin Hayes’ adventures are sharp witted, exciting, and delightfully different. Set under the sea, where mankind has fled the surface of earth and exists in underwater cities, the setting is highly imagined and falls neatly into my fun and relaxing shelf. One could almost forget that the cities are fragile and vulnerable habitats where one failure or mishap can kill thousands. Where air, clean water and food are the highest of commodities.

You can depend on Corin Hayes to be a character who we love despite his numerous flaws. His battles with the past, he drowns with booze whenever possible. Readers can’t help but sympathize with his feelings. He has lost his family and his sub crew. He is always haunted by memory and survivor’s guilt. He has a knack for being in the wrong place at the wrong time and the stories of his narrow escapes with violence and death in this strange dystopian world are addicting. His first person narrative gives one a sense of everything happening in a way that is quite unnerving, from breathing Oxyquid instead of air, to the stink of a garbage barge and the claustrophobic mazes of the Boxes.

Although SciFi to the bone, Corin Hayes has the same irresistible character appeal of many urban fantasies like the Daniel Faust series by Craig Schaefer and The Iron Druid by Kevin Hearne without the paranormal aspects. Highly recommended reading.

At last, but definitely not least, we also have a surprise reveal on the cover for Corin Hayes Back in Blue!  Due for publication on April 30, 2019.

Blurb: Corin Hayes is back and he’s not happy about it. In the corporation owned cities at the bottom of the ocean, life can be a struggle. The rich have it all, the poor have little but the air in their lungs and even that is owned by someone else. When war erupts between the corporations, Hayes finds himself caught in the middle of it all. Back in the navy and sent on missions which utilise the destructive power of his Fish-Suit, his life is in danger every moment. An old comrade and a young recruit stand beside him as the submarines set sail and Hayes faces up to the truth of war. Nowhere is safe and death is a single mistake away. However, the biggest threat may not come from the enemy across the ocean, but from the traitors and spies embedded in his own military. If Corin wants to survive the war, he must find the traitor and end their life before all is lost.

After studying for a Diploma in Creative Writing, G R Matthews taught the subject at A Level and holds a BSc (Hons) in Geography. Currently working in education with a focus on Child Protection and Safeguarding, he finds time to write in the evenings between battles to get his children to go to bed and the desire to binge watch Eureka on Netflix. He has also studied (been hit a lot) Judo, Kung fu, Wing Chun and Kickboxing – and is not particularly skilled in any of them (hence the being hit a lot).

A D&D enthusiast, G R Matthews prefers the rogue (stabby stabby… who me?) as it suits his imagination and allows him to hide from all the things that go (accidentally) wrong during a dungeon crawl… (and no one can prove I set fire to that town… it was only a little fire, honest!). As a self-taught guitarist the best that can be said is that at least he doesn’t sing along to the songs (all the time) and the few thousand, over the years, who’ve heard him play (and sing) are mostly fine (some, to be fair, are still in recovery, but we wish them well).

Alongside the books published so far, three other books are completed but as yet unreleased. Rivers of Songs and Shadows has been described by Jamie Cowen (Agent to Adrian Selby) as Abercrombie-esque and is the first book of a Six Kingdoms Saga.

At night, he sits and dreams that Spielberg, Lucas, Keanu Reeves, someone, anyone, reads his books thinks they’d make a great movie series (they would, that much is definitely true). With two children (where did they come from?), a wife (long suffering, caring, strong) and two hamsters (who actually show him the respect he deserves), G R Matthews is known for his self-deprecating sense of humour (true), his chiselled jawline (false), and his long career as a heart-throb film star (utterly false).

You can get your copy of the new omnibus by clicking the image below: