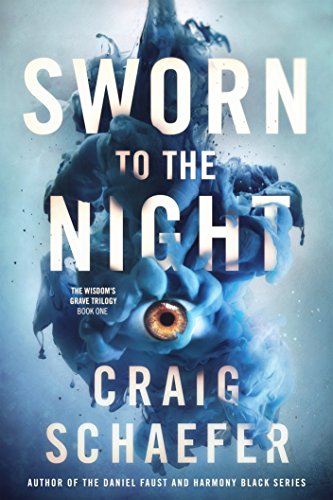 This time, they’re writing their own ending.

Craig Schaefer has been writing urban fantasy for quite a few years. This is his second entry in Mark Lawrence’s SPFBO competition. Many will be familiar with his Daniel Faust series and Harmony Black series in urban fantasy. But the two mesh here in an entirely new way that has been a long time in the making.

Two of Schaefer’s characters, Marie and Nessa, are from the Revanche Cycle, a fantasy thriller series in which book one, Winters Reach, was published in 2014. All his series are interconnected but they are not interdependent. You can pick up just about anywhere in any of his series and enjoy a thoroughly entertaining book. I knew this was a book I couldn’t resist reviewing from the first chapter.

Marie and Nessa have met devastating ends in Schaefer’s other tales, and are doomed to repeat this tragedy throughout time. This is their story. Those who are familiar with them, may have been crushed emotionally by their predestined doom in the Revanche Cycle, but take heart, the doomed lovers have reappeared. Nessa will be a force unlike any other this time around. Readers will also find other familiar characters from Schaefer’s series making an appearance in Sworn to the Night, most importantly Daniel Faust and Harmony Black, but reading any of the previous books isn’t required in the least.

Sworn to the Night, book one in the Wisdom’s Grave Trilogy, is also a brilliant stand-alone. I have read several of Schaefer’s Harmony Black books, and the appearances of these other protagonists got me thinking about how long Sworn to the Night has been culminating.

I recently chatted with the author about the length of time and number of books he has written, some 22 of them at this point, including this climatic build up in The Widsom’s Grave series.

G:  Hello and congratulations on making a finalist’s spot in the 2018 Self Published Fantasy Blog Off! Having finished Sworn to the Night I found it was an amazing amalgamation of some of the best urban fantasies you’ve ever written, though, having only read Harmony Black, I am making an assumption. I enjoyed them very much. Most writers just get better with time and you are likely no exception, so I’ll stand by that. I love the way you’ve taken characters from the worlds you’ve created and given them their own stories. Sworn is a complicated story, and every familiar cameo is so well done. I am looking forward to Detonation Boulevard, and Bring the Fire books two and three in the Wisdom’s Grave trilogy.

Craig Schaefer:  I’m so glad you enjoyed the book! The Wisdom’s Grave trilogy is basically the capstone of my urban fantasy universe, what I’ve been building up to for the last five years or so (though I tried to make it accessible to someone who’s never read any of my stuff, as well). And yep, my professional career launched in 2014; I had some professional publications before that (a few random magazine articles and a short stint as an advice columnist for a Chicago newspaper, of all things), but that was where I got serious.

My blogger did post a review, over at Lynn’s Book Blog , and she rather liked it — I’m genuinely surprised to have made it into the finals, given that the SPFBO seems to lean toward more traditional epic fantasy, but happy to have made it this far. I’m not sure if that signifies any kind of overall trend in readership, or if I just did something right with this one. The trilogy is my best-reviewed series to date, and people who like it seem to really like it (and people who don’t…really don’t. Which is cool, not every book is for every reader. And a story that pleases absolutely everybody probably isn’t taking any chances or saying anything interesting…)

The book’s origin began years ago, when I read an article about LBGT erasure in media; essentially, how if you see a bisexual or lesbian relationship on-screen, the odds are shockingly likely that one or both characters will end up dead in short order. It happens a LOT, to the degree that “bury your gays” is a decades long and well-established literary trope. Somehow that led me to “Okay, what if two lovers found out that they were slated to die for the entertainment of an unseen audience, and they decided to hunt their author down and force him to rewrite their ending?”

At that point I had already been laying the foundations for my fictional universe’s parallel worlds, as well as the concept of a handful of people who endlessly reincarnated into new versions of themselves, and that was the exact canvas I needed to tell the story. Serendipity! From there it was a matter of biding my time, laying the groundwork in my other books, and moving all the pieces into position over the next few years until everything was ready.

G: Many thanks for allowing me to share this Craig!

Get your copies of Wisdom’s Grave by clicking on any of the covers:

Marie Reinhart is an NYPD detective on the trail of a serial killer. When she sleeps, though, she dreams of other lives; she dreams of being a knight, in strange wars and strange worlds. On the other side of the city, Nessa Roth is a college professor trapped in a loveless marriage, an unwilling prop in a political dynasty. She’s also a fledgling witch, weaving poppets and tiny spells behind closed doors.

When Marie’s case draws her into Nessa’s path, sparks fly. What comes next is more than a furtive whirlwind affair; it’s the first pebbles of an avalanche. Nessa and Marie are the victims of a curse that has pursued them across countless lifetimes; a doom designed to trap them in a twisted living fairy tale, with their romance fated to end in misery and death.

They aren’t going out without a fight. As they race to uncover the truth, forces are in motion across the country. In Las Vegas, a professional thief is sent on a deadly heist. In a Detroit back alley, witches gather under the guidance of a mysterious woman in red. Just outside New York, an abandoned zoo becomes the hunting-ground for servants of a savage and alien king. The occult underground is taking sides and forming lines of battle. Time is running out, and Nessa and Marie have one chance to save themselves, break the curse, and demand justice.

This time, they’re writing their own ending.

Craig Schaefer’s books have taken readers across a modern America mired in occult mysteries, from the seamy criminal underworld of the Daniel Faust series; to the supernatural espionage and intrigue of the Harmony Black series; to the apocalyptic parallel worlds of the Wisdom’s Grave trilogy. He currently lives in North Carolina, where he can be found haunting museums, libraries, abandoned crossroads, and other places where dark fantasy authors tend to congregate.