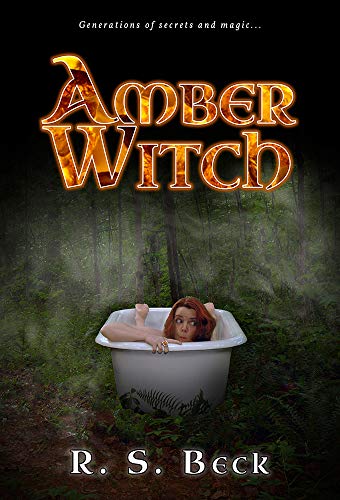 A fresh urban fantasy with heart.

For readers who love a well written story that they can connect with, Amber Witch is a satisfying read full to the brim with eclectic characters.

A young woman finds herself pulled back into the past 150 years, summoned by her ancestor, a witch of impressive power. The main character, Kat, having had no knowledge that she too is a witch, is trying to find her own power while avoiding the very real danger of being trapped in very dangerous times where she doesn’t belong. She and her friend Suzy, with help from Kat’s  gran, must find a way to outwit Kat’s great grandmother five times removed and a witch of impressive powers.

The details within the story build Kat’s present day life as an antiques seller, with her beloved Gran, Edy, now fading in a care facility, the death of a friend, and the close friendship she rekindles with her best friend’s mom Suzy. Kat finds strength in them and must reconcile the incredibly impossible past she finds herself in. No detail is overlooked in the historical scenes and the robust cast makes this a book both a mystery and thriller as well as an urban fantasy.

The result is a riveting story about magic and time travel, with a very relatable main character who must discover the secrets surrounding her life and family. Kathleen, or Kat as she prefers, must delicately tread a time and place where she doesn’t belong. All the while she finds reasons to distrust Helene, but is inexorably drawn to the magic she knows she can teach her.

The pacing is headlong, and the book is a page turner you won’t want to put down until it ends. Filled with a warm and heartfelt friendship, ancient magic, a good bit of snarky dialogue, and an ending that will leave you grinning ear to ear.

This was highly entertaining and I want to see more from this talented author.

Waking—naked and confused—in an antique tub not her own, Kat discovers she has been drawn back in time by her ancestor Helene, a witch of vast and arcane power. Welcomed into Helene’s Victorian England home, Kat is offered the chance to learn the magic of elder days and explore talents she never dreamed she had.

But the thrill of magic soon wears thin, and Kat finds herself trapped in the past, fighting to get back to the life she left behind—her friends, her grandmother Edy, and the cozy antique shop she calls home. Flung back and forth through time, Kat must find the secrets hidden in a mist-shrouded forest, on a mysterious stone lost in time, and within Edy’s dementia-weakened mind. For Kat wasn’t called back for her benefit, but because of Helene’s need. Waging a war with Fate, Helene knows her destiny is best thwarted by family.

Because no bond is stronger than blood.

Born Rebecca Sánchez, Beck was raised in the Hudson Valley of upstate New York. Beck often reflects on the people and places of her youth in her writing. The first generation on both sides of her family to speak English as a first language, Beck was taught early on the importance of words — the right words. However, like many, Beck had to leave home to realize what she needed in a college was in her (metaphorical) backyard at her beloved SUNY New Paltz. There Beck continued her education and received both her Bachelors and Masters degrees in English.

Beck later traded the Shawangunk Mountains of New York for those surrounding Asheville, North Carolina where she spends her day largely in the past — teaching about dead, British writers. Weekends she likes to treasure hunt with her husband, rummaging through estate sales, collecting pottery and blown glass from local artists. She is enslaved by two cats that frequently let her know her services are lacking. However, her grown children seem to tolerate her better as she makes a mean cheesecake.

You can order Amber Witch by clicking the cover here:

One Reply to “Amber Witch by R.S. Beck”