It’s release day for the second book in the Iron Souls series by Becca Andre. It was just August when we posted the release of the first book here and our prolific and hard-working author has surprised us all by getting this out so quickly and doing such great work on these books. I am definitely already wanting the next one.

You can read more on the story-behind-the-story on Becca Andre’s site by clicking above on this beautiful banner picture created by the author.

Another absolute pleasure to lose yourself in, Becca Andre writes fantasy that is just  good fun while still holding that sense of danger and amazing magic. Soul Singer is the second book in her Iron Souls series. It picks up without a hitch at the end of book one, Ferromancer, and gives us more than we expected in this unusual fantasy steampunk tale.

A great deal of the world building is done through her characterizations and there’s always more show than tell, which makes this a pleasure to read. Becca Andre does her historical research well for Iron Souls and you will learn new things about her historical setting in each volume. You’ll also find ingenious inventions. The result of the magic she has so skillfully created in Iron Souls. There is always great dialogue between her characters with a lot of wit, and are they are complex enough to capture your heart or give you shivers of dread.

In Soul Singer, the cast expands with more fascinating, and in some cases rather horrifying, additions. Andre adds new magical discoveries within the plot that destroy our preconceived notions, right alongside those of her characters. Adversaries aren’t what they seem, and could become allies. The real evil may not be quite so apparent. The servant may be the master and ordinary talents may turn into extraordinary powers. The lines between black and white points of view become blurred and the grey areas make tough choices even harder for a woman whose simple life has become very complicated with the addition of a kidnapped Ferromancer about her canal boat.  Add to this a hefty dose of Andre’s new magic system, a rather unique one at that, and so rare that most ordinary people have never encountered it, or anything like it, and you’ve got a great read for both lovers of Historical Fantasy and Steampunk alike.

The Iron Soul series is told from the perspective of a stubborn, young, and rather impulsive woman, who has been raised on a canal boat, plying goods and cargo upon the Ohio & Erie canals in 1890. The unpowered canal boats are pulled along a towpath by mules, which are kept stabled on board when the boat is docked. The intricacies of the canals and the lock system, and the way of life of the people who live upon them are so well realized, you can’t help but want the same things from life that they do, which is to continue to make a living on the boats, while competing with the ever-growing system of the faster railroads.

You can pick up your copy by clicking on the covers below.

Captain Bridget “Briar” Rose only wanted to stop the railroad’s expansion and save the canal life she loves. She didn’t intend to make herself and her crew outlaws, or stumble into a magical world she knew nothing about. And she certainly didn’t mean to damn a man, but that’s exactly what she did to Grayson, a brilliant railroad engineer who turned out to be much more than he seemed.

To set matters straight, Briar is on her way to Cleveland to meet with a woman who may be able to help Grayson. But getting there won’t be easy. Wanted posters are everywhere, an old…friend is stalking Grayson, and he’s attracted the attention of the Scourge—the executioners of the ferromancer world.

If she’s to keep Grayson safe, Briar must pretend to be his keeper. Which won’t be easy. Not when she knows so little about his world and her own newly discovered magic. Can she fool those who know that world so well? Or will Grayson pay the price for her failure?

Many thanks to Becca Andre for the ARC of this novel in exchange for my review. I am a 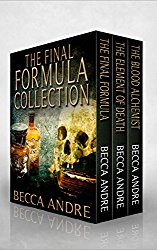 long time reader of her popular Final Formula Series, a paranormal urban fantasy with a tantalizingly twist on alchemy.