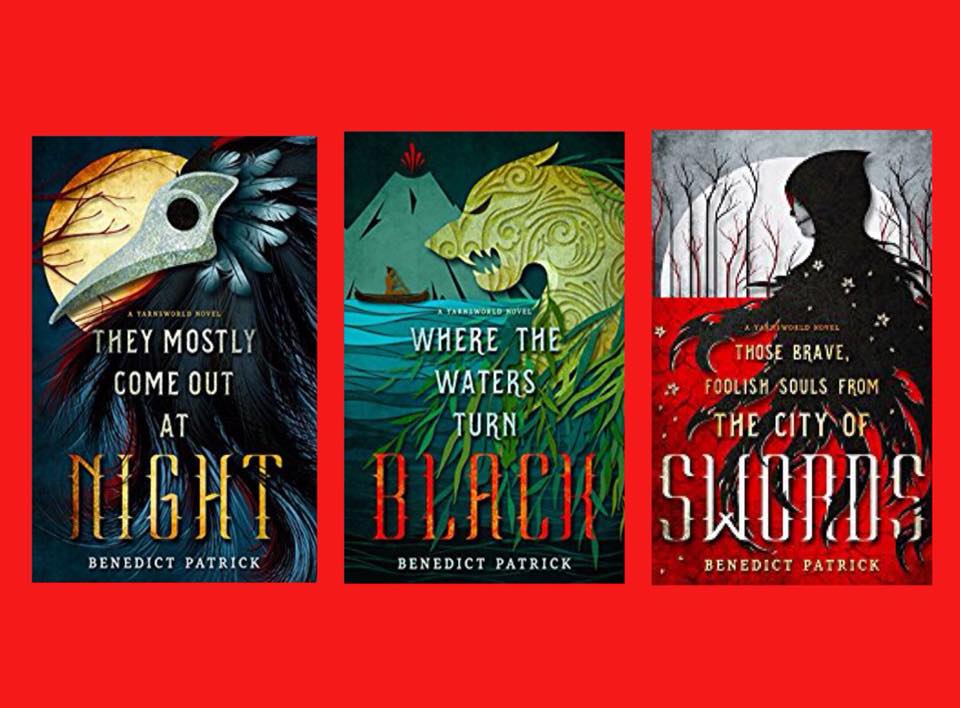 Yarnsworld. Where Fantasy meets folklore and exquisite stories emerge wound through and through with ancient tales. The imagination found here is rich, evoking the beginnings of mankind amongst the legends and myth that reach back as far as memory itself. Benedict Patrick has taken the oldest of these and woven a them into a world where his retelling of these oldest of tales is deftly intertwined with his characters and story arcs. They proceed side by side through the adventures, tragedies, and triumphs in each volume, revealing how Gods, myth and magic rule the worlds and lives of the characters and places he has created. The cautionary tales of the indigenous peoples in three different cultures come from the earliest natives of North America in They Mostly Come Out at Night. In Where the Waters Turn Black, the tales are from the Philippines and the islands of the Crescent Atoll. And in the newest Yarnsworld volume, the author takes us to the arid and deadly lands deep in Mexico. Each culture passing down through history these stories of legendary heroes, creatures, and gods are that are the center of their culture.

Highly recommended reading for all who love old myth magic, cultural folklore, and legends set in a dark twisting tale. The apparent simplicity of the prose found in each book will  catch you with your guard down, as the heart of each of the volumes is quite disturbing. Each one filled with monsters, jealous gods, and cursed creatures. Much like the Grimm fairy tales of old, Yarnsworld is rich with darkness, violence and peril.

Each book in Yarnsworld is a stand-alone tale with a flavor as different and unique as the lands from which they come. The stories bring the characters and world to life, while the folklore tales woven through, build and enhance the story arcs. lending us unique insight into the perils that await. Brilliant and beautiful inside and out.

They Mostly Come Out at Night

The villagers of the forest seal themselves in their cellars at night, whispering folktales to each other about the monsters that prey on them after dark. Only the Magpie King, their shadowy, unseen protector, can keep them safe.

Excerpt:
From a tale of the Corvae:
“Thank you, my lady. And… one more question?” Andromeda nodded for him to continue. “How many children do you have?” Her face grew grim, and she turned away from him, forever shading her features in blackness. “You must understand, madness can be infectious. I… I’m ashamed to say I struggle to answer that question. I do not know which survived childbirth or their father. Memories of the infants blend into one. Suffice to say he bred with me until my body could gift him no more abominations. A dozen, perhaps? I truly cannot tell. Now leave an old woman with her last thoughts.”

Where the Waters Turn Black

The Crescent Atoll is a remote string of tropical islands, connected by long canoe journeys and a love of stories. Islanders live in constant contact with gods and monsters, following the rules handed down by their storytellers to survive in harmony with these primal forces.

Excerpt:
“It was just a glimpse, down there in the dark distance. His eyes were closed and he was floating away from her. He was not alone. Behind her brother the girl could see a larger figure, gripping him with grey arms. This other figure was female, her face almost human, the creature’s white hair floating like a cloud around her head. Where her nose should be, her face was flat, and she had two black balls for eyes. Even from this distance, the sister could see the creature’s huge, pointed teeth grinning back at her. With a flick of her shark-like tail, the sea witch pulled the girl’s brother down to the dark of the ocean.”

Those Brave Foolish Souls From the City of Swords

Don’t draw your blade in the City of Swords, unless you’re willing to kill… or ready to die.
Young and filled with idealistic fervor, Arturo packs his blade and travels to the fabled City of Swords in the hopes of joining the dashing Bravadori. Yet upon arriving he discovers these masked vigilantes have more in common with brutal thugs than noble monster slayers. Disillusioned and mocked, he stubbornly refuses to give up his dreams.

Excerpt:”The young Bride cocked an eyebrow at him. “This is the most excitement I’ve had in months. Came out from under there to stop you from getting gutted for running down the wrong side alley, but if you want a fucking prayer, I’ll go back to hiding, thank you very much. The cathedral’s right over there -sure some of the more dried-up Sisters can sort you out.”

Yarnsworld, the first three volumes, is now available as a beautiful boxed set! Perfect gift for any fantasy reader!

Benedict Patrick is from a small town in Northern Ireland called Banbridge, but has been living and working in Scotland since he moved there at the age of eighteen. Tragically, that was quite a while ago. He has been writing for most of his life, and has been reading for pretty much all of it (with help from mum and dad at the beginning). Benedict’s life changed when a substitute primary school teacher read his class part of The Hobbit and later loaned him the book – he fell in love with the fantasy genre and never looked back.

3 Replies to “Yarnsworld: The Beautiful and Haunting Tales of Benedict Patrick”