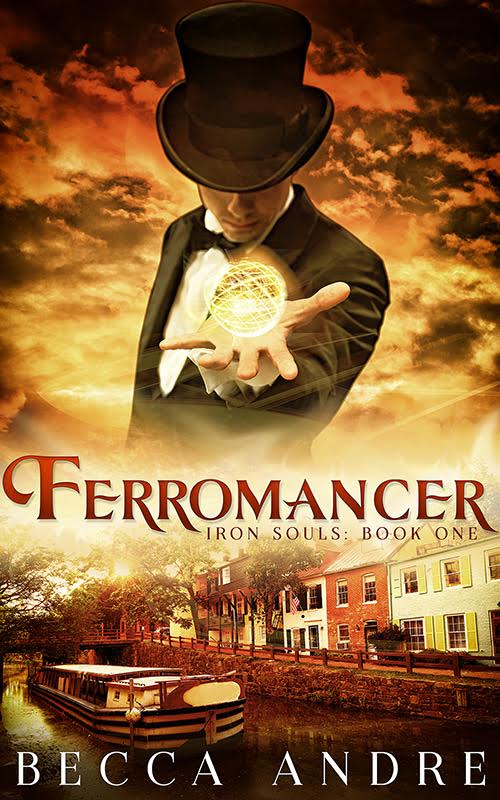 It’s release day! Many thanks to Becca Andre for the ARC of this novel in exchange for my review. I am a long time reader of her popular Final Formula Series, a paranormal urban fantasy with a tantalizingly twist on alchemy.  Grimmedian is excited to present to you her newest novel, the first book in her Iron Souls series, Ferromancer.
This new steampunk fantasy is available now in paperback and the ebook will be released at the start of 2018.

Getting to Know the Author :
Becca Andre lives in southern Ohio with her husband, two children, and an elderly Jack Russell Terrier. A love of science and math (yes, she’s weird like that), led to a career as a chemist where she blows things up far more infrequently than you’d expect. Other interests include: chocolate, hard rock, and slaying things on the Xbox. She also finds writing about herself in third person a bit strange.

Hi Becca,
Welcome to Grimmedian and many thanks for stopping in. Let’s break the ice with some fun first, then on to the writing.
For starters, badly describe your profession:

I wear a coat even when it’s not cold, and though I do a lot of mixing and baking, you wouldn’t want to eat anything I make.

When, how, or why did you start writing?

I’ve always made up stories–and frequently got in trouble for daydreaming in elementary school–but it wasn’t until I was in my teens that I started writing my stories down. It became a hobby for me. I loved to read, but if I wrote the story myself, it always ended the way I wanted it to. That’s probably my main reason for writing, though I also enjoy the challenge of trying to translate this image in my mind into words.

Ferromancer is a different direction for you in writing.  Why did you decide to write about the Ohio & Erie canals at the turn of the century?

I wanted to try my hand at a steampunk story—which is typically set in Victorian London—but I wanted a setting that was more familiar to me. The old canal is just a few miles from where I live, and the roads I travel run alongside that overgrown ditch. When I was a child, the old timers still called the road into town the towpath (the path the mules walked to tow the canal boats). So setting my new story on an Ohio & Erie Canal boat seemed like a natural fit.
Once I learned more about it, I was fascinated by these people who worked and lived year round on their boats. These boats were also lacking in any sort of technology (they were pulled by mules, after all) and that created an interesting contrast between my fictitious canal people and my imaginary ferromancers with their advanced technology.

Where did your ideas on ferromancy come from?

I’m a science geek. Even when I’m writing about magic, I tend to try to explain it with science. In my Final Formula Series, an urban fantasy, I took my chemical knowledge and gave it a magical twist via alchemy. This time, I’m writing a steampunk fantasy, so I needed an advanced technology set in a nineteenth century world. That got me thinking about the industrial revolution and the advancements in iron production that fueled it. What if there was a magical iron alloy? What if there were a group of people who could make/use it? From those ideas, ferromancy was born. (Ferro comes from the Latin word ferrum, which means iron. See, science geekery at work.)

Your first series, The Final Formula, is a favorite of mine. How has your reader base developed and changed from your first through the last book in the series?

I’ve been pleasantly surprised by the variety of people who seem to enjoy my stories. I expected the audience to be a bunch of middle-aged women like me, but I’ve had men and women of all ages tell me they like the books. I’m not sure the reader base has changed as the series went along. The first book is always the gate keeper to a series. If a person likes it, they’ll usually stick around to see how it ends. If not, then the first book is all they’ll read.

How important was reader feedback in the series development? Can you tell us about your relationship with your readers?

Reader interaction is important in understanding what my fans prefer in a story, but it also inspires me to keep writing—even when a manuscript isn’t cooperating. I enjoy interacting with readers on my blog and social media. And it’s awesome when folks take the time to write a review.
I like to show my appreciation by hosting the occasional giveaway and offering extra content over on my website. It’s the most fun when the readers can interact. I’ve asked them for questions when doing character interviews and once asked for help naming a street in my story. I’ve also done some alternative point-of-view scenes and short stories, and made those available to newsletter subscribers. Unfortunately, I don’t have a lot of free time, so I don’t get to do that as often as I’d like.

What is your go to support base for writing, getting feedback, and encouragement?

I have a group of beta readers who are either writers themselves, avid readers with a wide base of knowledge, or self-described grammar nerds. But I don’t call on these people until the first draft is done. I’m on my own until then—which is where reader encouragement (When are you going to get that book done?!) keeps me going.

How much writing had you done before publishing your first novel?

Writing was truly a hobby for me and I spent well over a decade scribbling down stories in notebooks. But aside from the occasional daydream, I never pursued writing as a career. During that time, I wrote a ten novel series just for fun. I still like the story, and the later novels aren’t bad, but the first few books stink to the heavens. I’m certainly glad I put in the practice, and though they don’t realize it, my readers are too.

Who is your favorite author?

That seems to change as I go through life, but I always come back to Jane Austen. Pride & Prejudice is my all time favorite. Maybe that’s a little odd for someone who writes fantasy with some darker elements, but then, my stories always have a touch of romance. (Okay, sometimes more than a touch.)

What’s the first book you ever read that left you breathless?

I remember the first book that ever made my heart pound. It was The Black Stallion by Walter Farley, and I was twelve years old. Though I loved to read as a kid, that was the first time a story truly captured me and carried me into its world. I just hope I can do the same for the readers of my stories. That would be real magic.

Wishing Becca all the best and our thanks for so many rewarding hours of reading! 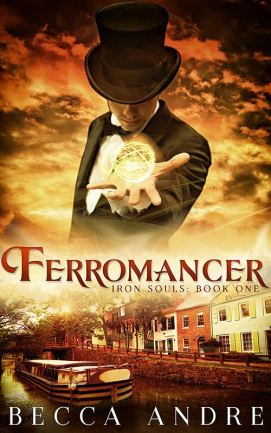 A brilliant story set in the canals of the Great Lakes when the steam and coal run railways threatened the livelihood of the cargo boats that plied the Ohio & Erie Canal. As always, Andre’s characters are well rounded, a delight to read, their beliefs and motivations clear. Each of them unique and deftly woven into the story, their own backgrounds come into the forefront as the action mounts up. Masterfully turning the mundane into intrigue, magic, and murders.

Becca Andre has a style with snark and wit, coupled with fantastical danger in ordinary seeming places. Add a heart melting little dragon construct, with soulful eyes, discovered by accident while snooping for ways to undermine her rivals, and there’s Steampunk fantasy aplenty. The story setting in the late 1800’s is well done thru the characters point of view, with due homage to the ingenuity of canal and lock system which was the life’s blood of the towns set along its banks. The protagonist, Briar, is a determined and scrappy young woman who defies the convention of society, dresses as a man, and runs a loyal crew. Drinking, fiddling, and an occasional brawl with low life competition is part and parcel for her and her loyal crew.

Bridget Rose has only wanted one thing her entire life, and that was to captain her boat in the company of her loyal crew. Nicknamed Briar after the boat itself, the Briar Rose, she defies convention to live the simple life she loves on the canals, ferrying cargo to and from the towns along the route. It’s the only life she’s known since the age of three. A simple life aboard the boat, with her crew and fiddle, is all she desires, but new locomotives and railways are a threat to her business and she would go to great lengths to see them hampered in any way.

Without warning, she is swept up into her cousin’s machinations to sell the boat and invest in the railroads. Though her beloved boat isn’t hers yet. When her uncle died, the business was inherited by her cousin Andrew, who has been Briar’s guardian and owner of her business and boat, since early childhood. Briar longs to earn enough to buy the cargo boat outright and make it her own.

When she stumbles across a new locomotive, the likes of which have never been seen, she quickly finds herself in over her head. As Andrew’s plans to sell the business and have her married off to his new business partner are revealed, Briar decides to take a reckless course and steal the Briar Rose and the designs for the for new locomotive before her cousin can stop her. Briar gets more than she bargained for when Grayson turns up on her boat demanding return of the magnificent new locomotives plans. Briar can’t let him go before she can prove that Ferromancy is powering the machine, and takes him hostage aboard the boat while she heads for Columbus.

There are more serious threats lurking than a handsome and perplexing valet for a ferromancer that can destroy her way of life.  Briar finds herself on the run with a very unusual hostage. Both of them pursued by a dangerously powerful Ferromancer, her spiteful cousin, and the authorities as well.

A thoroughly enjoyable read, you will not want it to end. The action is constant and you will find you are eager to discover the truth of the magic behind the little dragon construct, the locomotive, and the much maligned and feared Ferromancers. True to form, with a bittersweet ending, Becca Andre gives us a fast paced and tense ending with more of the tale begging to be told. We will be waiting for it eagerly.